Sorry it's been so long since my last post; things have been very busy! There are currently two projects that have taken my time/attention (and heart) that I'd like to share a bit about with you.  Both projects have a lot to do with children; one being a children's home and the other being a bi-weekly children's outreach event.

The children's home project is probably the most complicated and expansive endeavor I've put my name to since my arrival, and the situation is this:  Many years ago there was a children's home established under the Orthodox church's care (whether officially or unofficially, I'm not sure).  It is on a piece of land situated just outside one of the most developed and expansive squatter camps I've seen here, called Atteridgeville.  I would like to show you pictures of the living conditions, but I can't bring myself to pull out my iPhone to document these people's homes; it just seems wrong to expose them. I will say this though, I'm fairly confident that I could build a home comparable to the ones there with nothing more than my two hands, a hammer and nails.

Although I hear that the children's home itself was very nice at one point, over the years it has gone into a states of disarray.  There is no proper locking door, most windows are broken, the roof leaks, etc.  It is unsafe to live in, but it is currently home to 4 teenage boys, one girl in her early 20's and the caretaker and her child.

The big plan is to fix up the current residence into a hostel type housing for older children, build a new housing area that would be able to foster 16 youths, possibly build a volunteer medical clinic onsite (that could be used by the residents in the surrounding areas), build a church, cultivate a garden and soccer field on the land, and get all of the properly running and registered with the South African government.

…but as it is, I'm taking baby steps to get things going.  I have visited the site multiple times; getting to know the current caretaker and assessing the land with priests and builders.  I've created intake documents for the current residents (to hopefully go over with a social workers soon), have created and begun the filing process to make the children's home a registered non-profit organization, and have ordered the first of the building materials to fix up the current building (work to start on December 1st).

The other project that I'm really excited about is a children's outreach that has been spearheaded within the Brixton community.  My home parish is located in an impoverished suburb of Johannesburg, close to the CBD; however, most of the people who attend our services do not live in the area. Because of this, I decided to organize an afternoon meal twice a month to feed and bond with the kids living directly around Saint Nicholas.  I really want them to see the church as a place that is for them… and not just on Sundays.  This past weekend was our first event; including donated pizza, cold drinks, cookies, get-to-know-you games, and playing in the street out front.  I wish you all could have been there; it was such a joyful afternoon.  When I arrived 45 minutes early I was greeted by 2 boys posted outside the front gate.  They quickly scurried away to gather the others, as I hurried to get things in place.  They came back with 15 other kids, and they were shortly followed by 5 more and 3 parents.  The food was handed out as the children (without prompting) went to wash up.  Once everyone was seated I asked who wanted to pray… they all raised their hands and then proceeded to recite the Lord's Prayer from memory (their ages ranged from 4-13). 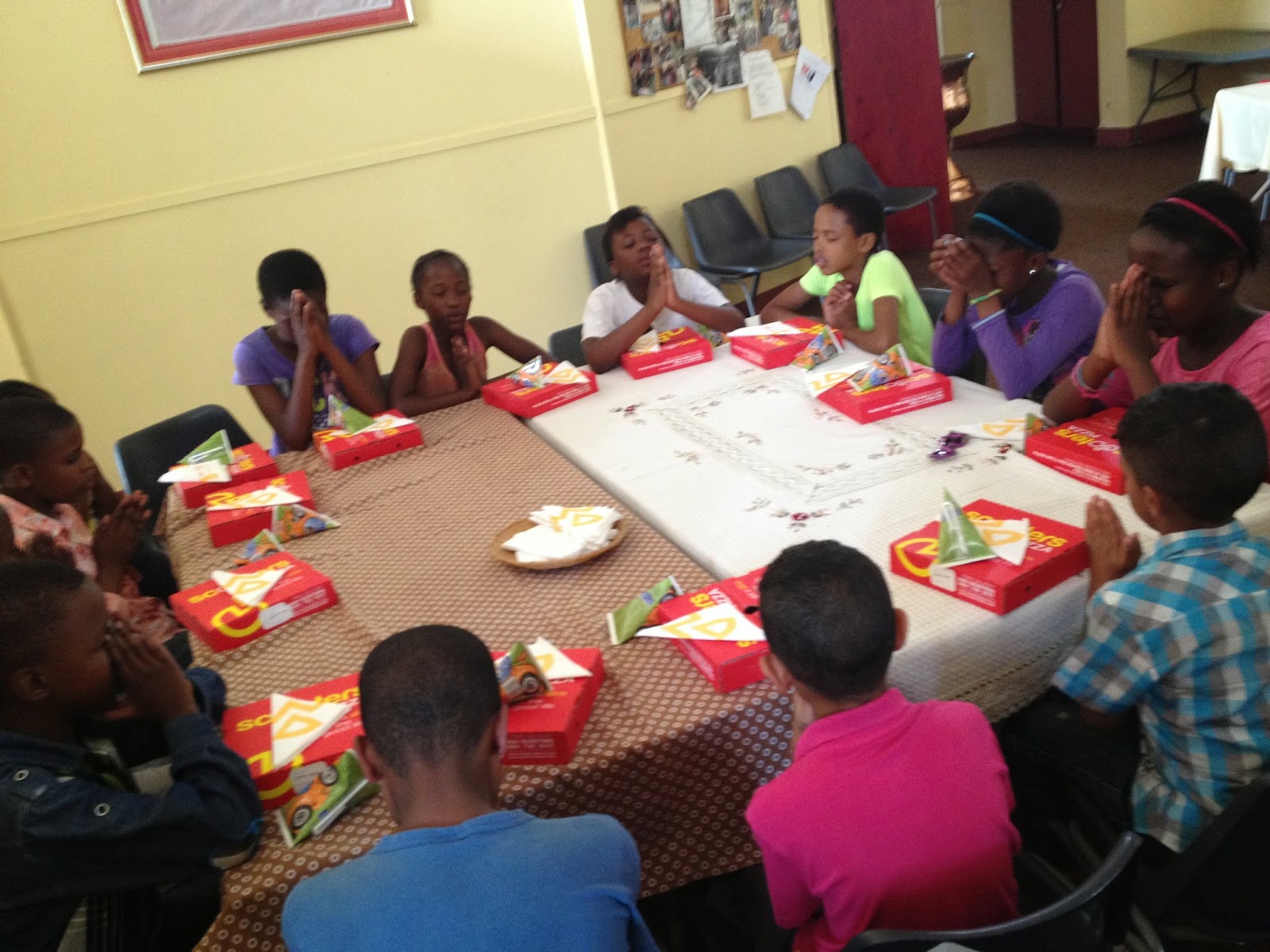 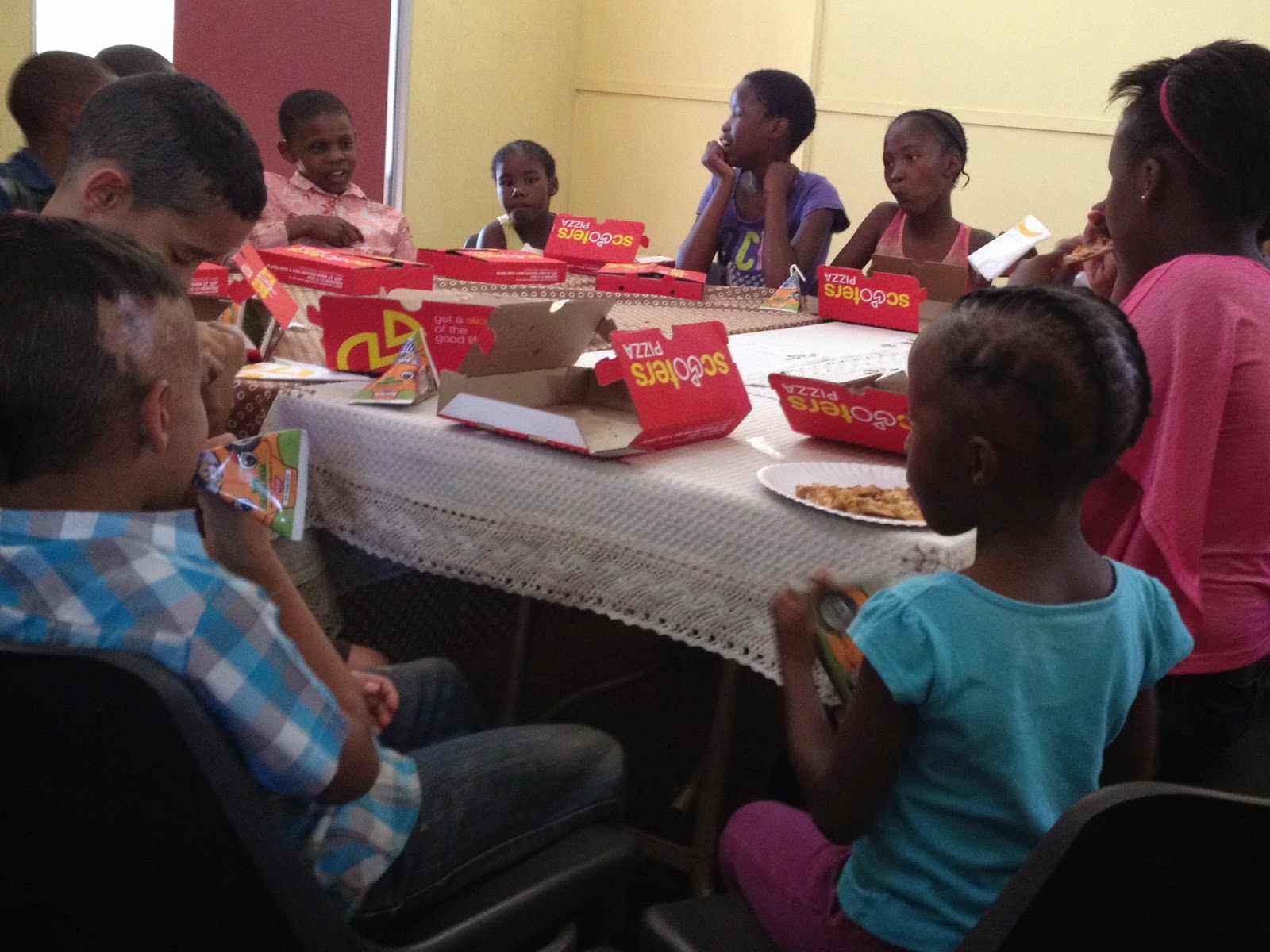 After eating we headed outside to play, prompting neighbors to curiously look on.  There was laughing and competition and lots of fun.  By the time the event was coming to a close, there were about 5 adults outside watching the games and talking amongst themselves; it was really lovely.  The next event is scheduled for next weekend, and I've managed to sort hotdog and crisp donations and a volunteer soccer coach to help out.  I can't wait!

If you're interested in contributing to this outreach, donations can be made here: https://kayciesimmons.webconnex.com/southafrica

God bless you all in your work and please keep these and other missionary efforts in your prayers.
Posted by kayciesimmons at 6:21 AM